What to Say When a Baby is Born with Down Syndrome

So, you hear the news that someone in your family, a close friend or an acquaintance has given birth to their baby. Great news! 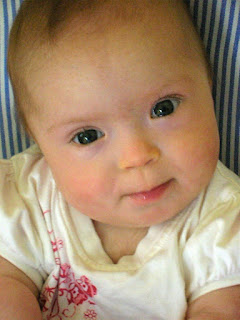 But within seconds you are told that the baby has Down Syndrome.

[There follows a mixture of disbelief, shock, stunned silence, anger, hurt, disappointment, perhaps a feeling that a sixth sense told you so, a desire to ‘fix things’ or even, perhaps if you are young you just don’t understand, but if you already love someone with Down’s Syndrome, a sense that this is not the end of the world, that you will gently guide them.]

So, what to say when a baby is born with Down syndrome?
Well, I can honestly say that I have never been in this position in my life… But I can say with equal measures of honesty that we probably experienced the full gamut of reactions from those within our social circle in the weeks following Natty’s arrival.  So I can tell you what worked for us…

Everyone is different of course, and this is never truer than in matters of pregnancy and birth, but whatever thoughts and emotions you have as onlookers, the parents will have already experienced them 100 fold.  Oh yes.

1)  Don’t be afraid to say something.
This is where Natty’s entrance into the world really sorted the wheat from the chaff amongst friends.  Longstanding friends didn’t know what to say and soon disappeared, awkward and embarrassed.  Those we’d got to meet relatively recently stepped up to the mark, supported, helped, offered childcare during our never-ending trips to the hospital.  Family drove through the night to meet her, also in shock, but there.

The Wise and Respected Godmother says that when people are in crisis you must never be afraid to talk to them.  If your words are meant with kindness, even if you don’t quite say the right thing, you can’t make them feel any worse than they do already.  The only way is up.  It’s a win win situation, if you see what she means.

2)  Congratulate the family on the arrival of a beautiful new person in the world!
My husband popped the cork on the bottle of vintage champagne we had bought for the happy event anyway.  We toasted our daughter who lay in an incubator in intensive care that night, even though that was the last thing we really felt like doing.

Send a card of congratulations (not condolences!), send a small gift for the baby to have near her if she is in hospital, buy a small pack of toiletries or wholesome snacks for parents spending many hours in hospital or purchase a pretty coolbox for mums transporting breast milk to and from hospital twice a day.

Ask to see the baby or a photograph, ask if s/he has a name yet, how much she weighs, how the birth went, in fact anything you would normally ask any new parent.

Our dear neighbours (who happen to be incredible, supportive doctors) immediately bought us a beautiful rose to plant in the garden, called ‘Congratulations’.  When we did work to the house it had to be moved…I was SO nervous as I attach so much sentimental value to it.  It survived!

3)  Be realistic
When people acknowledged the challenges ahead of us and our feelings of desperation, it made us take their words so much more seriously.  Over-optimism can be very insincere after all.  Understand that the parents are grieving the loss of the healthy baby they were expecting.

The midwife who said “None of us want this for our children, but she is beautiful and you will cope.”

Another who countered my “I don’t want to love her because I am afraid she’s going to die,” with “That baby needs your love my dear, whether she lives or dies.  So get to that hospital and give it to her.”  So very wise and true.

“It will be hard but I will help when I can.”  “She is looking a little stronger/better than when I saw her last.”  “I can’t imagine how you feel….”  all delivered with hugs from friends.

But be prepared for any advice you give to be ignored.  If I had a pound for every time someone gave me the number of the lady who runs the local Down’s Syndrome Support Group I would be rather wealthy.  It took me 2 years to contact her (she is a dear friend now), but we still remain rather a private family (believe it or not!) and do not join in many organised group activities.

And I didn’t once ever contact any friends of friends whose phone numbers were passed my way simply because their children had the same number of chromosomes as mine….you get my drift.

4)  Avoid outdated language and clichés
Just say the baby HAS Down(s) Syndrome.   (I can’t bring myself to say the other phrases but you all know what I mean)

S/he is a baby first and foremost.  S/he will have the features and traits of her family before those of any other child with Down’s Syndrome.  She will follow their path, learn their traditions and values, and be dressed the way they want her to.

S/he is here.  Don’t ask endless questions about ante-natal testing.  (You might also want to avoid mentioning the mother’s age or the state of her eggs!  One of the loveliest DS Mums I know was 18 when her little girl was born…)  I actually don’t mind people asking “Did you have testing?”  It’s the “Didn’t you have testing then?” that gets me…the subtext being that if we had, she wouldn’t be here of course.

For unbiased advice that covers all bases, you can’t do better than read the Down Syndrome Australia website or Down’s Syndrome Association website.

PS)   This is not number 5) because it is not advice
Perhaps it’s just the way I am, but  reverse psychology worked pretty well on me.  I can clearly remember 2 pieces of shockingly negative input from 2 separate individuals.  So shocking and so negative that they made me sit up and think, ”Right, you’ll see!”…

The first was from the kind of nonchalent midwife that wafts through your space shortly after the news has been given to you about your baby’s diagnosis.  When asked by my doula what we should do about the breast milk (meaning – how to get it into the baby) she replied “Oh, don’t worry about that, it’ll soon dry up after the shock she’s had today.”
RIGHT then…breastfeed I WILL, the same way I fed her sister.
It took 3 months before the naso-gastric tubes came out, but we mastered it (another blog perhaps?).

The second was from a professional acquaintance who (perhaps speaking from personal experience) spouted, “You don’t have to keep her you know.  You can just say goodbye, nice knowing you…”
I might have been waivering on whether we could cope or not, but this made me realise that no adoptive/foster parent could do it better than us!

And do the very best we have done since that moment.


In summary, the birth of any of your children should not be by far and away the very worst day of your life.
For so many of us it is.
And simply the right words, actions and attitudes could change that.

Tell it right.  From the start.

To read advice for medical staff giving a post natal diagnosis, click here to my website for the original article.
Editor note: the terms Down syndrome and Down’s syndrome have been used interchangeably. Both are correct usage in Australia and the UK respectively.

Today I cried at a kid’s party.

To The Special Needs Mother: This was you all along